This ancient and nutrition-rich plant was grown all over Europe before it was replaced by spinach and was forgotten. Good King Henry is strong, enjoys a long life, and does not need much attention. It has no illness or bugs as enemies and its roots are deep and strong. As the leaves contain saponins the leaves need some kind of treatment before eating. The leaves are used like spinach and can still be used when the plant is in flower. Shoots can be forced by covering and eaten as asparagus. The flower-heads can be used as broccoli and if the seeds are left to ripen they can be used as quinoa.

Caucasian spinach is not a new plant for Finland but is still rather unknown. If it thrives it will overwinter well and may grow to over three metres in the summer. Harvesting can start early in the spring and continue until midsummer. Leaves and young shoots can be used as spinach or raw in salads. 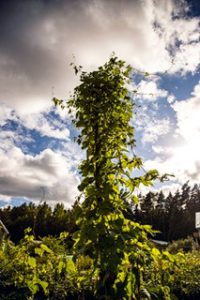 Hops are grown mostly for brewing beer in the Nordics. Elsewhere in Europe it is appreciated spring vegetable, its shoots being sold at market.
Hops are the fastest growing plant in our climate. They needs support and can then reach six metres in length. The female flowers (hops) are used for brewing beer and there are countless varieties grown for that purpose. Shoots and young leaves can be eaten raw or cooked. If you dont like the bitterness the shoots can be forced under a dark bucket. The plant will not suffer even if you harvest all shoots at the same time.

Horseradish is grown for its strong tasting roots. It can be used instead of the more expensive and not easily grown wasabi (Eutrema japonicum). Preserves containing horseradish will not go mouldy. The young leaves, shoots , flowers and flowering stems taste good.

Meum is a fine looking plant that grows slowly and doesn’t need much looking after. It likes direct sun and a lime soil, so Tallbacka should be the perfect place for this unusual herb.
The feathery foliage can be used like dill, but the taste is not the same. Meum is especially suited to cold sauces with fish. It is good for decoration and in a bouquet.

A heritage herb and medicinal herb associated with many superstitions. It will grow almost anywhere and can grow up to two metres high and will tolerate semi-shade. If you need to use the plant all summer it should be cut back occasionally.
Lovage is a celery-tasting stock herb and a major component of herb salt.

As the scientific name suggests, Cicely has a strong smell. It is happy in semi-shade and will self-sow readily. It belongs to the celery-group and positions itself somewhere between vegetable and spice herb. All parts can be used and they taste of aniseed. One speciality are the raw, green seeds which can be used as aniseed sweets.

A hardy and productive plant growing almost anywhere. It tastes best when grown on good soil in semi-shade. If it needs to be harvested for a longer period it should not be allowed to flower.
It does contain oxalic acid so it is best to cook the leaves before being eaten, Good for making dolma.

Sorrel or dock (Rumex rugosus)
This plant looks like its wild relation common sorrel but is larger and the taste milder. French sorrel (Rumex scutatus) is thought to taste even better but is not very winter hardy. Sorrel produces fine new leaves all summer if occasionally cut down. Snails and slugs can be a problem.

Rhubarb first established itself in cultivation in the Nordics in the 19th century even though it had been grown for thousands of years. Its popularity has to do with access to sugar and traditionally the first dessert of the spring is made with rhubarb. The acidity comes from the oxalic acid.
There are many varieties and hybrids of rhubarb. Our commonest variety is Viktoria. There are other varieties with less oxalic acid such as Glaskins Perpetual. We have tried various kinds of rhubarb at Tallbacka and at the moment Viktoria and Maatiainen have been successful.

One thing that got me researching into soil management, mulching and composting was growing perennial onions. Some years ago welsh onions grew in the old vegetable plot and became enormous. When we started growing them in the new beds the results were depressing. The garlic chives wouldn’t grow properly, chives turned yellow and the Welsh onions didn’t germinate. I tried many times, sowed seeds in the spring and autumn and planted out plants. The results were poor and I started suspecting a curse or poisoning.

Last summer 2021 I tried an experiment. The beds with the garlic chives hadn’t been touched for months so I spread out a layer of bokashi soil. For some days the smell was sweet and strange and our garden dog Sera’s nerves were on edge, she put her nose to the ground. But after a few weeks the result was visible, the colour of the leaves changed, the tufts started growing and soon the onions were in flower.

I spread compost around the chives and tree onions. We received sand leek Allium scorodoprasum, field garlic Allium oleraceum, and rather surprisingly as a gift, Babington’s leek Allium ampeloprasum babingtonii. We put them in our ‘kindergarten’, a small bed. 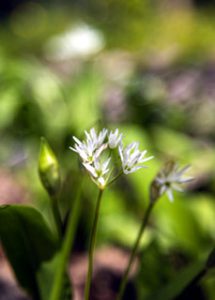 After initial difficulties even the wild garlic Allium ursinum began to thrive between the beech tree and oak. The bulbs have rooted and they are beginning to multiply. With it’s gentle garlic aroma it is an excellent spice, a real luxury product early in spring.