MULCHING IS OUR GOAL

When we started growing berries I felt an urgent need to get some woodchips as soil cover under the bushes. I knew from experience that the spring-planted bushes would have a tough time during the summer drought. Weed perennials like couch grass will invade bare soil extremely quickly. Of course I knew that there were many opinions about using woodchips like the chips stealing the nutrients from the soil and the terpenes from conifers affecting plant growth. I am, however, of the opinion that those woodchips saved the bushes and trees – the truffel-trees needed even more protection.

In 2017 the first strawberry patch was planted in ridges through a layer of plastic weave mulch. This plastic mulch has squares ready drawn on so is handy at planting time and keeps the weeds under control and the berries clean. Last year we noticed that the plants had to be renewed and it was easy to remove the plastic mulch layer in one piece. This is the advantage of using weave instead of just plastic film. I the decided that the new plants would not be planted in weave but use traditional straw instead. The straw must be renewed every year and does not stop the weeds so effectively but perhaps the microbes in the soil will enjoy it more! 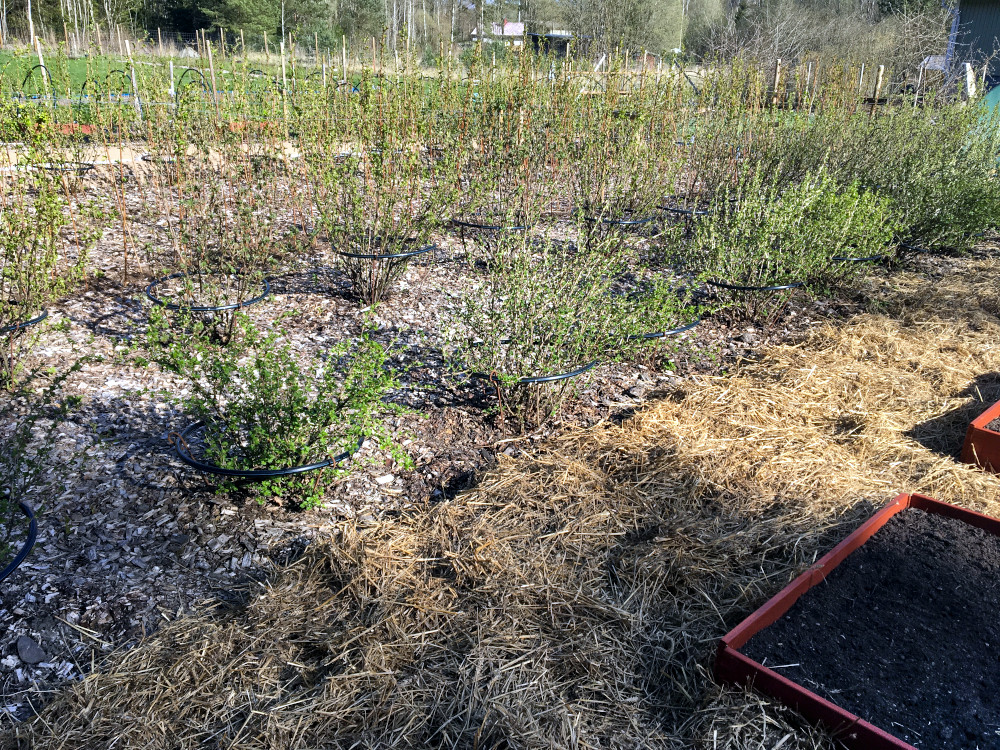 The most burning question about mulching lies in our vegetable patch. The moraine soil dries quickly and because of this sowing will often fail. The patch has felt dry and lifeless and there are no worms either. Because of this the surface of the soil has been hard like a crust.

To begin with, after sowing, I used a fleece covering to keep the moisture in. Large fleeces can be difficult: they tend to fly away in the spring winds and weeds thrive under them. The amount of weed seed in the soil seems to be endless and using the cultivator in spring just brought more to the surface to grow. The small seeds that were sown had no chance.

The books and videos that gave us so much inspiration spoke incessantly of grass cuttings. Their superiority as cover against weeds was greatly acclaimed but especially as a fertilizer and its ability to increase the microbial life in the soil. Unfortunately getting enough grass cuttings is a problem. The old lawn hardly produces anything and there are good reasons to let the lawn take care of its own cuttings as fertilizer. Good lawns where the cuttings are saved and used are rare and often, too much fertilizer and chemicals are used that we cannot use them anyway. Weeds in themselves can be a good mulch as long as they don’t have flowers. It would also be good if the mulch could be crushed as the weeds can soon become large and look ugly lying on the ground. They may not even die because they can re-root themselves. When you mulch you need a lot of it and snails and slugs can be a problem underneath.

I have been thinking about and also planning trying a living mulch. It was difficult getting hold of seeds of Subklöver/Grävklöver (subterranean clover) but I eventually found them from a store in Sweden – thanks to Kinnekullefrö! This annual is a low growing legume which helps prevent the growth of weeds while fertilizing at the same time.

My biggest aha-experience making me feel really at home (

) this winter was when we got to know about the English gardener Charles Dowding. He has developed the No-Dig method which protects and helps soil microbes by avoiding unnecessary digging and destruction of the soil structure. He uses cardboard as cover directly on the ground and covers this with a thick layer of good home-made compost. Every year in autumn this is again covered with a 5 cm thick layer of compost. By then the old compost has been compressed and released its nutrients with the help of the soils own microbes. Worms and other microbes release nutrients in a form suitable for the plants and looks after the soil structure in the best possible way. A well-rotted compost does not contain weed seeds or pathogens. Dowdings system diminishes the need for weeding and disturbing the soil. Composting, however, needs to be well organised and effective as a lot of compost is needed especially when starting sowing beds.

I am very eager and hopeful. We want to learn to look after the earth and soil, with its small army of helpers, as well as possible. The earlier mistakes do annoy us a little still, but we didn’t know these things then. We can do things in a different and more intelligent way in the future and if it gives us a better, tastier, harvest of vegetables we can be very happy indeed.